In attempting to reduce neglect symptoms, many different interventions have been proposed. See Kerkhoff and Schenk (2012) and Luauté, Halligan, Rode, Rossetti and Boisson (2006) for reviews of neglect interventions and their effectiveness. A much discussed treatment procedure for spatial neglect is prism adaptation (Rossetti et al., 1998). During prism adaptation with a rightward visual displacement, an observer wears spectacles with prism lenses that shift the visual field to the right (mostly 10º). At the same time, he/she reaches for certain targets such as dots, starting from a central spot (e.g. at the trunk). At first the observer will reach too far to the right side. This pointing error is gradually reduced, known as “error reduction”. After reaching to targets for about five minutes, the prismatic glasses are removed, and an “after-effect” is observed in which he/she reaches too far to the left of a target. For a clear illustration, see Parton, Malhotra and Husain (2004). During prism adaptation in left-sided neglect, patients wear prism lenses with such a rightward visual displacement. Some authors suggest that the amount of after-effect corresponds to the neglect improvement after prism adaptation (e.g. Farnè, Rossetti, Toniolo, & Làdavas, 2002; Rossetti et al., 1998). On the contrary, others state that the level of error reduction corresponds to this improvement (Serino, Angeli, Frassinetti, & Làdavas, 2006).

Nathalie Vaes was the first Metrisquare member to develop a test for prism adaptation, for her PhD project at Ghent University. She describes her research in this scientific publication: Capturing peripersonal spatial neglect: An electronic method to quantify visuospatial processes. For the measurement procedure, the tablet was turned by 90 degrees, so that its short side was near the patient’s trunk instead of its long side. Regarding the aftereffect (reaching too much to the left of a target after removal of the prismatic glasses), manual measurements are easy to perform. In the pre- and postexposure conditions (i.e., before and after wearing prisms), invisible pointing is performed to, for instance, a central dot, after showing that dot to the participant. The aftereffect is then calculated by subtracting the measured locations of pointing pre and post. The error reduction (the rightward pointing error while wearing prisms, which gradually reduces) is less easy to measure, because it is an “online” correction. It takes place while the participant is observing and immediately correcting. So far, some authors have measured the deviation with the naked eye and a kind of ruler invisible to the patient. In view of a more exact measurement, we asked patients to draw a line to targets on the display. However, this line was only visible on the researcher’s screen. As in a classic prism procedure, the participants drew lines to a left or a right dot in the upper part of the tablet, starting from a central dot at the bottom. The dots are located 10 degrees to the left and 10 degrees to the right of the (imaginary) midline. To take baseline visuomotor performance into account, the patients drew lines randomly ten times to the left and ten times to the right dot before wearing prisms. This enables the calculation of precise measures of error reduction.

Drawn curves to the left and right dots, visualized on the test leader’s screen

After task execution, the data are processed by the Metrisquare server, according to the coding system and scoring scripts. In the Metrisquare DiagnoseIS software, a report of choice will then present the results, following an experimental or clinical layout (also adjusted following a researcher’s own preferences). The experimental report generates our created variables in a comma-separated-value file, facilitating subsequent data processing in SPSS and Excel. The clinical report is composed of images of the tasks, added comments, and tables or charts representing the performance. 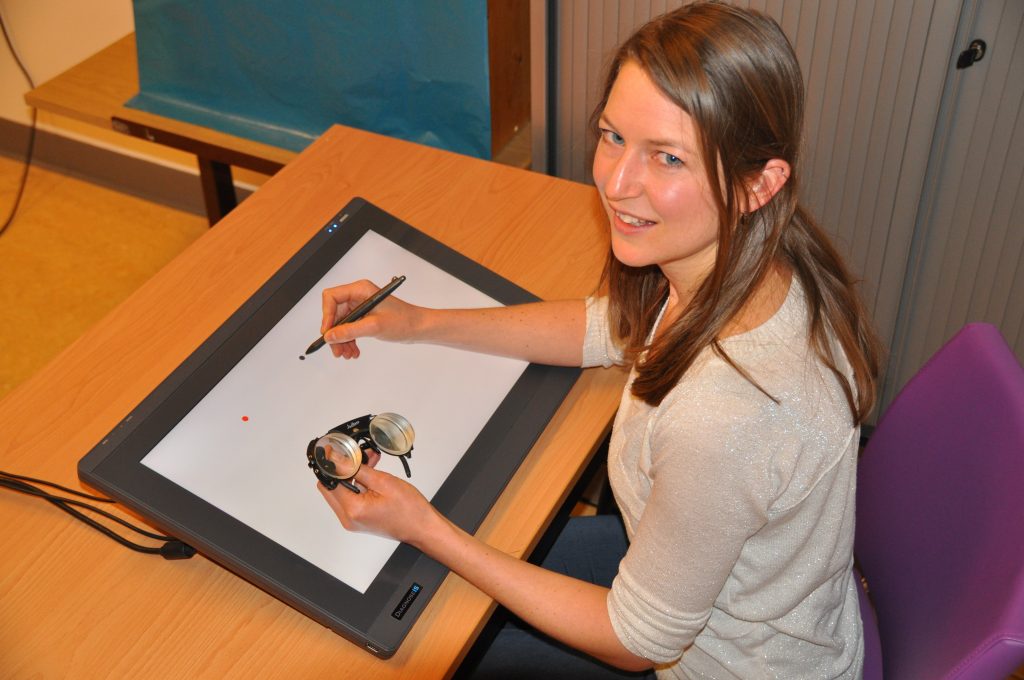