The testbattery consists of the following tests:

The Letter Digit Substitution Test (Van der Elst, Van Boxtel, Van Breukelen, Jolles, 2006) consist of letter-digit pairs followed by a list of letters. Under each letter the participants are instructed to write down the corresponding digit as fast as possible. The LDST is used to assess speed of information processing and is sensitive to brain damage, dementia and age. Houx et al. (2002) found a good test-retest reliability (Pearson’s correlation= .88).

The Verbal Learning Test (Van der Elst, van Boxtel, van Breukelen & Jolles, 2005) serves as a measure for verbal memory. During the task 15 words are presented 5 times to the participants. After each time the participants are immediately asked to name as many words as they can recall. This is a measure for short-term memory. After 20 minutes participants are asked again to recall the words (long-term memory). Finally, participants are presented with 30 words which include the 15 originally presented words. Recognition of the 15 words is assessed. All test-retest correlation coefficients were found to be significant, ranging between r= .36 and .68 (De Sousa Magalhaes, Malloy-Diniz, Hamdan, 2012).

Maastricht University has carried out multiple studies to compare the results of the pencil-and-paper-versions to the digital tablet versions. The research aims to establish whether a digital tablet assessment of cognitive performance obtains the same results as a paper and pencil assessment of these same tasks in a memory clinic patient population. The conclusion is that our digitalized assessments provide the same results as paper and pencil assessments do, as is further explained in this document: DiagnoseIS: A Computerized Form of Cognitive Testing at the Memory Clinic by Sanne Schreurs, Dr. Sven Stapert and Dr. Dymphie In de Braek.

Metrisquare is very grateful to Prof. Dr. R. Ponds and Dr. D. In de Braek for the many years of pleasant cooperation. In the picture shown below, Dr. Dymphie In de Braek presents the MAAS studies at a Metrisquare symposium. 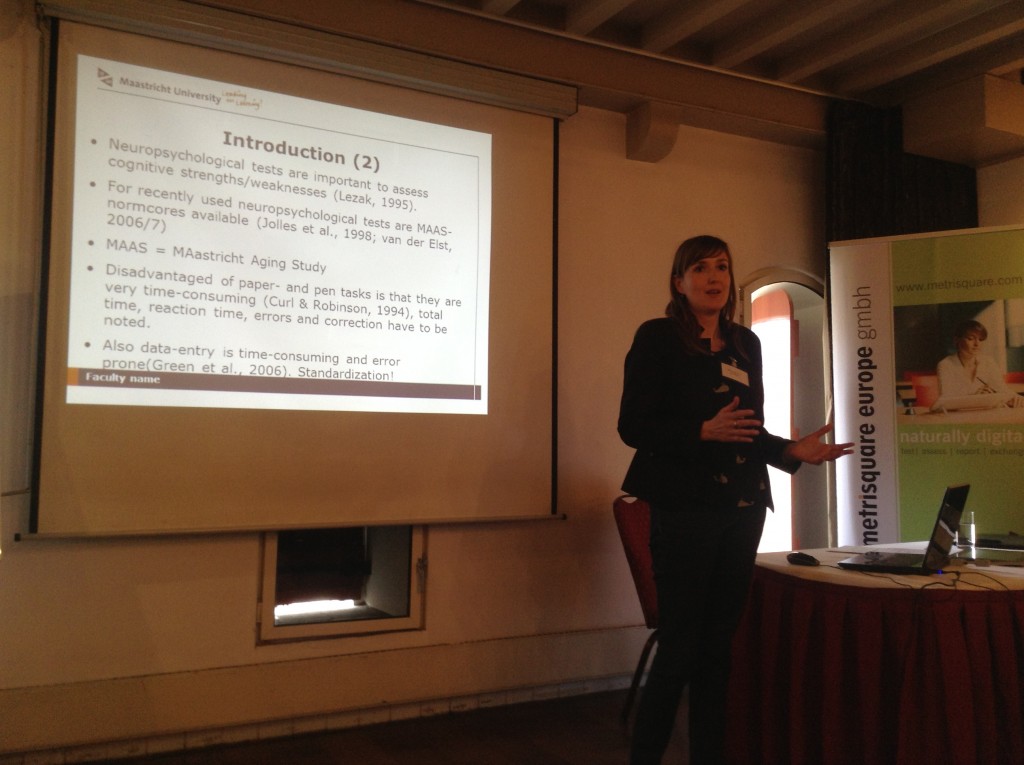