The DiagnoseIS software natively supports Wacom Pen and Touch Tablets. Many of our tests are designed to resemble pencil and paper tests. This way, traditional tests can be used in a natural, however digital environment. Clients, even elderly patients, do not even experience working on a computer as they are using the intuitive pen to respond to the tests. In the background, the software processes every single response automatically. Reports, including the drawings, graphs and normed results, are created with a few clicks only. Data can also be exported to PDF for clinical usage, or to CSV for scientific processing in SPSS, Excel or Matlab. Furthermore, it is possible to replay the drawings as a movie. Because responses and reaction times are automatically stored, more time remains to observe the client during the test.

The DiagnoseIS software is protected by a username and password, which can be entered in the login screen shown in the picture below. 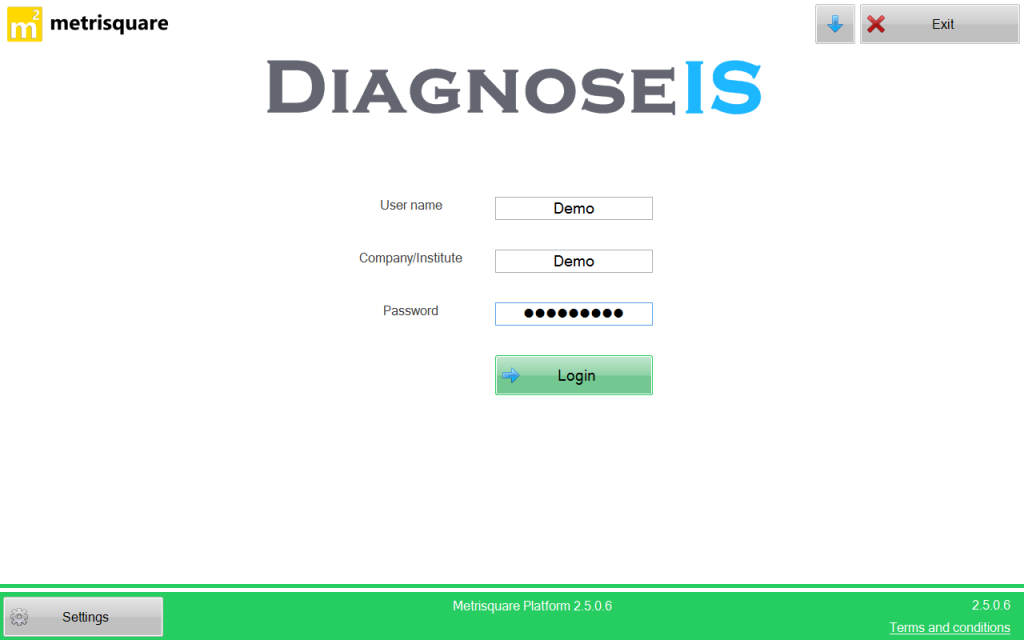 After logging in, the main screen is shown, where the client can be selected, as shown in the image below. In case the date of birth, education and sex are entered, the DiagnoseIS system can automatically compare measurements to norms. However, it is also possible to test using a client ID or anonymous code only. Comments can be entered, which will automatically be included in reports afterwards. 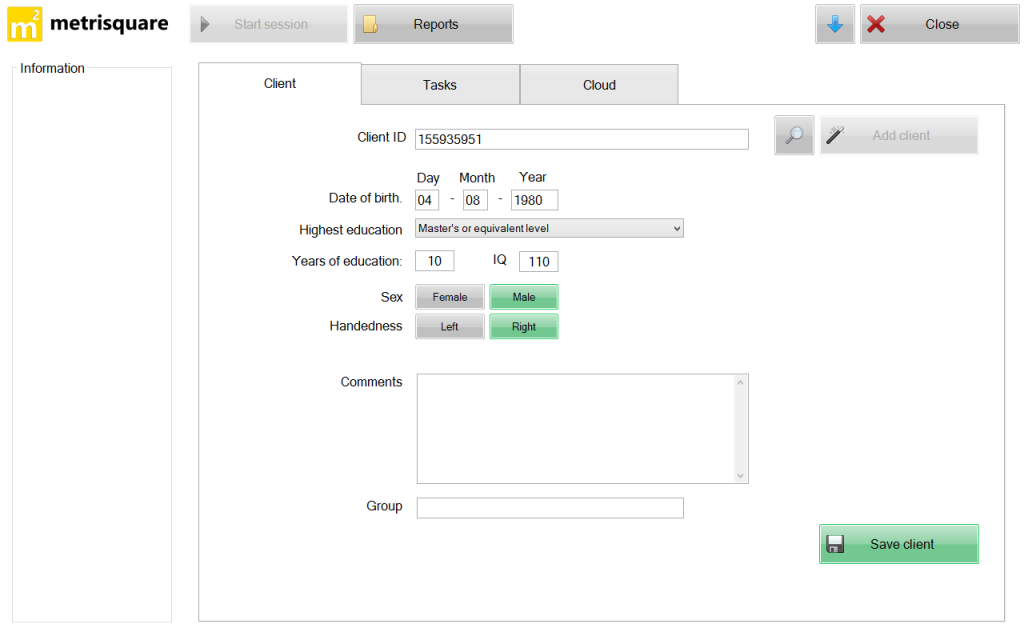 On the Tasks tab in the main screen, the tests or training tasks can be selected. By ticking a test, it will be queued for an assessment session. On the right side, the properties of the test are shown, e.g. who published the test, how long it will take to complete, the application of the test and the rating by you and other users. In case the same set of tests is used regularly, the selected tests can be stored as a test protocol, e.g. for Dementia, Parkinson’s Disease, Visual Neglect etc. 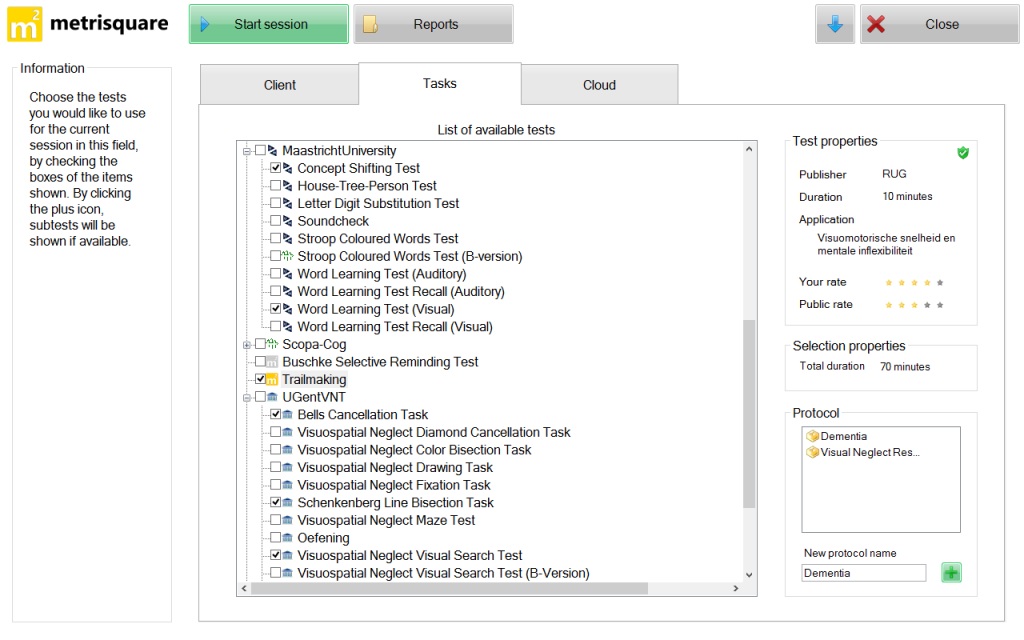 When the test session is started, the Test manager will be shown on the left. It indicates the list of tests queued for the current, as well as information on the current time and the time needed to complete the tests. On the top, a menu bar is shown which can be used to control the test. Many of the Metrisquare tests can be compared to an interactive Powerpoint presentation, constructed of pages (slides). In case the system is used in a dual screen mode, only the test leader will see the controls and test manager, while the client sees the test only, full screen.

The final step is to generate a report. This is where a lot of time is saved again: the DiagnoseIS software will automatically score all data and generate a report including images, graphs and tables. The report can be saved as a PDF document, or exported to CSV for further processing in SPSS or Excel.

For test developers, we provide a fully graphical test development module. With this module, tests or training tasks can be created. The following image shows an example: the development of a Block Tapping task. 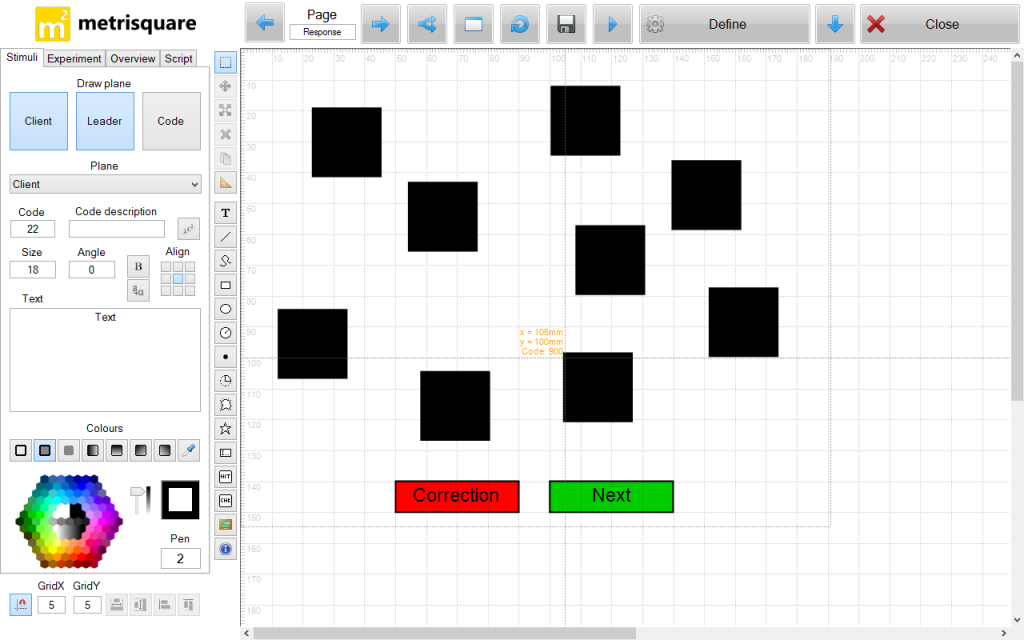